Today it's the final stop on the Don't Wake Up blog tour so it's my absolute pleasure to welcome author Liz Lawler to find out a little more about herself and her debut novel. 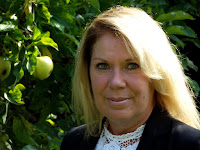 Born in Chatham and partly raised in Dublin, Liz Lawler is one of fourteen children and grew up sharing socks, pants, stuffed bras and a table space to eat at. Liz spent over twenty years working as a nurse, and has since worked as a flight attendant and as the general manager of a five-star hotel. She now lives in Bath with her husband.

Don't Wake Up is her first novel..

Can you tell us a little bit about yourself and your writing journey?
Writing for me began all of a sudden. It was not something that I had ever thought of doing. I’d just ferried the kids to school, first day back after the summer holidays and I came back to an untidy house with the intention of spending a good hard day cleaning. Instead, propelled by a need, I picked up a lined notebook that had some pages scribbled on or torn out and began to write a story. I spent the whole of that day writing and rose from the table exhausted, fingers stiff and unbending, yet exhilarated by the intensity of emotion I’d spilled out onto the pages since that morning. Days turned to weeks and weeks turned to months and by the end of the year I had filled more than a dozen of these notebooks. I then sat down to read them, at times barely able to decipher what I’d written, as I had either rushed or missed out a part of a sentence, and I could see a whole story had emerged, most of it about murder with characters that I could imagine as being real.

For the next few years I resisted writing, but like an addict I eventually returned to it and for the first time in my life I went to university, accepted to do a MA in creative writing. I felt a fraud that very first day, sitting among the other students who already had BA’s and were journalists, radio presenters, English teachers, play writers and even actors. Each of them had already come from a world where writing was a part of it. I was a nurse and the only thing I had ever written was the story I wrote a few years back that had gained me a place on this course. I still don’t think of myself as a writer – it feels too premature - I’m just someone who likes to write.

If you had to give an elevator pitch for Don't Wake Up, what would it be?
Alex Taylor is a successful doctor; she is used to dealing with trauma and the unexpected on a scale that most people don’t ever imagine. Her world revolves around life and death situations every day. She is no stranger to the unimaginable, until it happens to her. Only no one believes the story she tells For Alex the real nightmare has just begun.

The premise of this storyline is frightening, where did the inspiration come from?... hopefully not a true life experience!
Ha! That would be telling! Only teasing. The inspiration comes from my own imagination which is always on high alert to the risks in life. I see a hazard or potential accident happening in most probably everything. This part of my thinking has likely come from years of nursing and hearing of the hundreds of different ways people have hurt themselves. I am constantly saying things like, “Imagine if that happened or can you imagine what would happen if. . .” I can never look the other way once I have spotted a potential risk or hazard, as my imaginings of what could happened if I didn’t report it won’t let me. With Don’t Wake Up, I have just pushed my imagination further.

Psychological thrillers are proving to be a niche market at the moment, what do you think is the appeal to both writers and readers alike?
I think that people have always liked to test the boundaries of their fear, to feel their heart race, their mouth dry and their breathing turn ragged. The fight or flight response can be an exhilarating emotion, especially if you experience it from a safe place, behind the cover of a book or in front of a screen. And I think that is the point – it is from a safe place. Why else would so many people read scary books or watch horror movies otherwise? Though I have to tell you, I cannot watch horror movies. I am way too scared by them!

Did you treat yourself to something special to celebrate your publishing deal?
I had a lovely glass of prosecco. Or maybe it was two!

Finally what can we expect from you next?
Well the plot is already in my head and is building and pushing at my imagination more each day. I am already feeling afraid for my main character at the thought of the psychological torture they will endure. And I cannot warn them that it is coming! I’m not allowed to. All I can do is write their story.

Alex Taylor wakes up tied to an operating table. The man who stands over her isn't a doctor.

The choice he forces her to make is utterly unspeakable.

But when Alex re-awakens, she's unharmed - and no one believes her horrifying story. Ostracised by her colleagues, her family and her partner, she begins to wonder if she really is losing her mind.

And then she meets the next victim.
Posted by Sharon at 09:00