Although I'm not officially starting Christmas on the blog until next month, today it's my pleasure to be shining the spotlight on Pernille Meldgaard Pedersen and her debut novel Him With The Beard. 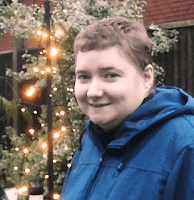 Pernille was born in 1988 and loves that she was born in the decade with the tallest hair, the most colourful clothes, and the best music.

Her imagination never stands still, and it’s often expressed in words and pictures.

She wrote her first story when she was six years old. It was about the cat she unfortunately never got but wished for more than anything.

She loves autumn and Christmas and believes in elves.

From day to day she is a knight in training, an animator, and a secret agent – she has saved the world a few times by now.
She’s also a professional daydreamer.

She thinks the recipe for a good book is the same as the one for having a good life – a sense of kinship, humour, love, and that one thing that gives you a daily smile.

Vestercity is a fictional city based on her upbringing near the city of Herning in Denmark.

Thank you so much to Sharon for letting me visit her amazing blog.

Read on for an excerpt of my debut Christmas Chicklit book ”Him With The Beard”.

I threw a little glitter here and a few spruce branches there, and with a high-pitched voice and the biggest smile on my face, I sang so loud the whole house shook.
“You better watch out! You better not cry! Better not pout, I’m telling you why! Santa Claus is coooooming to tooooown!”
Sausage, our chubby little dachshund, barked along with me. In my home, we loved Christmas. And not just loved – no, we LOVED Christmas!

Christmas was the best time of year, where the lights dispelled the darkness, where people were a bit kinder and where the lovely smell of clementines and spiced brown cookies drifted through the house. You’d never hear anyone say no to all the Christmas goodies. In fact, it was customary to have these in kilo bags, all served at once, while we all talked about how soon it would be January.
Like a kangaroo, I jumped onto the couch, trying to tie one end of the Christmas garland to the ceiling, but it wasn’t a very effective method, because you can’t jump and stand still in the air at the same time. On the other hand, it was really fun and mum-naughty.
I stopped my jumping when I, just my luck, heard the front door open. In came my two open-mouthed helpers.
Maybe I went a little nuts with the glitter?
HA! You could never have too much glitter!
“You’re home!” I shrieked and threw my arms excitedly around my beloved family. Maybe I was also a little high already from the combination of marzipan, mulled wine and CHRISTMAS.
My nine-year-old daughter Mille saw me coming and backed away comically until she reached the wall.
I squeezed her in a hug.
“Not the sweater,” she protested with flailing arms, her cheek completely mashed against mine.
Confused by her protest, I looked down at my best and most Christmassy sweater, with Santa in his sleigh pulled by his reindeer, and Rudolf’s nose still lit up. Nothing strange to see here!
Kalle, my husband, kissed my forehead with a happy smile. “You’ve already started.”
“Yep! And I need a strong and tall man to hang things up, and a strong and culinary Christmas girl to help me bake in the kitchen.”
Three nudges of my elbow and a wink of my eye made Kalle move. Mille crossed her arms.
“I don’t want to help.” My heart almost stopped.
“What do you mean?! It’s Christmas! Of course you want to help! I’ve bought the ingredients for all your favourite cookies! Vanilla wreaths, peppernuts, klejner! I’ve also found your sack so Santa knows where to put your presents.”
“Santa? Just how stupid do you think I am? Santa is just something you’ve made up. I know that it’s Dad that puts the presents in the sack, and that it’s Preben from next door who dresses up as Santa every Christmas Eve.” Now my heart really did stop.
“But Santa does exist. He puts presents in the sacks when we’re all asleep. You know that.”
She rolled her eyes dramatically.
“It’s true!” I protested.
“As if! Do you really want me to believe that there is a guy who’s lived for thousands of years and just so happens to know all the children’s wishes?”
“Why is that strange?” I asked confusedly. “We tell him our wishes in a letter, and…”
“And send it to the North Pole.” She finished my sentence with barely concealed mockery, her arms crossed. “But why hasn’t anyone found his house then?”
“It’s supposed to be a secret. And also, the North Pole is a big island…” Her foot began to tap.
“And what about the toys? Why would he make copies of items you can buy?” Why so suspicious?
“Because that’s what you’ve wished for?”
“And I suppose that the elves help him?” I shrugged. I assumed so.
“Reindeer can’t fly,” she continued. Now she was crossing a line.
“Santa’s can.”
“And where does he find them?”
“I don’t know…”
“No, because they don’t exist. And you can’t know the answers to things that don’t exist.”
“You can just ask Santa when he comes. He knows where he found them.”
“Mum, stop! Do you really want me to believe that?”
“But it’s the truth!”
“Fine, then we’ll say he ‘exists’.” My eyes widened in surprise when she lifted her hands and did quotation marks around ‘exist’. I knew there was a first time for everything, but who taught her that?! “But then explain this,” she continued. “How does one man manage to visit all the world’s children on a single night?” I had to think about it for a bit.
“Well…you see, not everyone celebrates Christmas…and some countries have Christmas Eve on other dates…”
“That’s still millions of children on a single night!” she shouted, making me jump. I had never seen her this angry before. “Mum, stop lying. Santa doesn’t exist.” She turned and stomped up the stairs to her room.
“Mille! Are you okay?” I called after her. A bang sounded when she slammed her bedroom door.
Worried, I took the first step up the stairs to go see her, but Kalle stopped me with a hand on my arm.
“Better let her be.”
“But something must have happened at school – she was looking forward to decorating this morning.”
“She’s probably just tired,” he told me calmly, and tried to distract me by being distractingly charming when he found his old elf hat in the Christmas box and put it on.
On the couch lay our Christmas sacks. Kalle took his.
“Well, then I’ll just hang my sack up in the usual spot, right next to the loft hatch. Then good old Santa won’t have to carry my heavy gifts too far.” He winked. He smiled when he finally got a smile out of me. Whistling, he went to the kitchen to hang his Christmas sack in the carefully calculated, strategic spot. When I was alone, I looked up the stairs with a strange feeling in my stomach.
Perhaps Kalle was right.
She was probably just tired.

Do you remember that moment you stopped believing in Santa Claus?

When nine-year-old Mille suddenly no longer believes in Santa Claus, it turns the house upside down.

Her mother, Stella, is in a pickle as the hunt to find Santa Claus unearths some family secrets.
Christmas is at risk!

And there’s only one person who can save it.

Count down the days until Christmas with this tale about Santa Claus and Danish Christmas traditions.

Help me celebrate my release by entering the rafflecopter below. Open internationally.

You can win this awesome prize: One Jim Shore Santa Claus Ornament, Santa Claus Marshmallows, A Chocolate Advent Calendar, A Pretty Christmas Storage Box and finally, A Signed Copy of my book Him With The Beard. 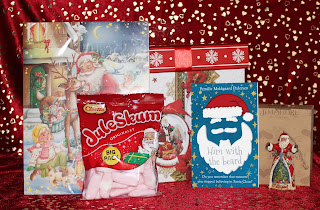