Today I'm handing the blog over to Emma who is chatting to Bella Osborne about her latest book A Walk in Wildflower Park which is published in paperback today and was previously published as a 4 part eBook series which Emma reviewed. 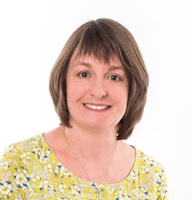 Hi Bella and welcome back to the blog. It's been a few years since you last visited us so can you give readers a quick recap/intro to yourself and your writing journey?
Thanks so much for having me on your blog. I’ve been jotting down stories as far back as I can remember but decided that 2013 would be the year that I finished a full length novel. Since then I’ve written five best selling romantic comedies and been shortlisted twice for the RNA Contemporary Romantic Novel of the Year Award.

My stories are about friendship, love and coping with what life throws at you. I live in The Midlands, UK with my husband, daughter and a cat who thinks she’s a dog. When not writing I’m usually eating custard creams and planning holidays.

Describe your new book in five words and can you give us a reason for one or two of those choices?
Friendships
Expectations
Parklife
Shenanigans
Intrigue

Friendship is what holds my main characters together throughout the trials of life: Sophie is juggling family and work and feels she’s failing at both and Anna is licking her wounds after another failed relationship.

Shenanigans is one of my most favourite words and it sums up the office antics and the comedy that runs through the story.

Was the tagline 'life is not always a walk in the park' your inspiration for the books title considering many of the characters are going through turbulent times which sees them go through many changes over the course of the story?
The park came first and was always the key backdrop to the story with both Anna and Sophie living there. The title A Walk in Wildflower Park was conjured up by myself and my editor and the tagline seemed to fit perfectly because of the impact life has on my characters plans.

Had you the entire story mapped out in your head or on paper before you began or did certain characters or situations take you by surprise whilst you were writing?
I am a big planner so the story is always well fleshed out and plotted on post-it notes before I start writing. That said, my characters frequently surprise me by going off in slightly unexpected directions. I found that the children frequently stole the scene with their comedy antics.

Who was your favourite character to write about Anna or Sophie? Both of these women are going through various experiences which are testing them but yet how they deal with things is very different. I think both women will appeal to different readers for various reasons.
I enjoyed writing Anna and Sophie for different reasons. I think Anna is an endearing character who ultimately is looking for someone to love her how her dad loves her mum. She has some ghosts in her past which impact how she reacts to things in the present making her quite complex and interesting. Whereas Sophie’s exasperation with her husband Dave and her quick wit were a lot of fun to write.

I thought the last part of Wildflower Park was the best as it was full of so many surprises that I really didn't see coming. I loved how things took a very dramatic turn and a lot of little hints and clues began to fall into place. Did you enjoy keeping all those big revelations until towards the end or were you tempted to reveal things a little earlier ?
As I mentioned I’m a big planner and work to a fairly standard three act structure, so the clues were all woven into the story and drip fed to the reader with the big reveals all planned to come together towards the end to keep the reader engaged.

Anna is a complicated character who we can guess has suffered in the past and these experiences still haunt her. How do you think she coped with what has thrown at her at various points in the story and do you think the past really affects how she thinks and acts in the present with regard to all aspects of her life?
I think Anna is a reslient individual who thought she had dealt with her past and moved on but that wasn’t the case and a number of times in the story that takes her by surprise. As challenges are placed in front of her she pulls on her inner strength and her friendship to help her cope which I think is what a lot of us do in real life.

As Wildflower Park was first published in parts I was curious to know do you write the entire story first and then separate it into sections for serial publication or do you do the opposite? I love how each part end on a cliffhanger making the reader eager to know more.
As I write the story to the plan I’ve already developed I know where each part needs to end and therefore where each cliff hanger has to be. I write and edit the book as a whole story but each part is marked as we go through so it’s easily separated for digitial publication as a serialised novel.

Was there any particular research you undertook before writing Wildflower Park?
I visited Moseley Park near Birmingham which was the inspiration for Wildflower Park and that was hugely helpful in enabling me to build the location in my mind. I visit Birmingham city centre fairly regulalry so geographically I was already familiar with the city but I fitted in a few extra visits because I will seize any excuse for a shopping trip. I did some research into parkour which was interesting and I have a friend who is a retired GP who I alwys go to for medical advice for my characters. I’ve also worked in offices for over thirty years so I had plenty of material to dip into for those scenes!

And finally what can we expect from your next? Will it be another book first published in parts or do you plan to publish book all in one go?
My next book has the working title ‘It Could Be You’ and is based in Brighton. I’m assuming it will be released in four parts ahead of full publication because I know a lot of my readers like that format but ultimately that’s up to my publisher so we’ll have to wait and see.

Life’s not always a walk in the park…

Anna thought she’d found The One – until he broke off their engagement exactly a year before their wedding day. Hoping new surroundings will do her the world of good, she moves in to a place of her own on the edge of gorgeous Wildflower Park.

With the help and friendship of her neighbour Sophie, Anna quickly settles in and pledges to focus on her career, but a handsome new colleague seems determined to thwart her attempts at every turn. And when she receives a text from a mystery man, it looks as though an unlikely romance is on the horizon…

Is Anna about to be swept off her feet by someone she really shouldn’t be falling for? Or could this be the new start she needs and deserves?

Emma's reviews for the four part series can be found via the links below:

Part One - Build Me Up Buttercup
Part Two - A Budding Romance
Part Three - Oopsy Daisy
Part Four - Rooting for You
Posted by Sharon at 08:30