Extract from Lost You by Haylen Beck

Today is a busy day in the publishing world with hundreds of fantastic books hitting our shelves so I wanted to join in and help shout about one of the books that I'm looking forward to reading, sooner rather than later, Lost You by Haylen Beck.  So it's my pleasure to share with you an exclusive extract below to whet your appetite. 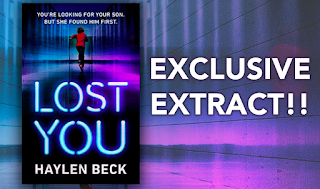 When a little boy goes missing, his mother desperately wants to find him . . . before someone else does.

Libby would do anything for her three-year-old son Ethan. And after all they’ve been through, a holiday seems the perfect antidote for them both. Their hotel is peaceful, safe and friendly, yet Libby can’t help feeling that someone is watching her. Watching Ethan. Because, for years, Libby has lived with a secret.

Just days into their holiday, when Libby is starting to relax, Ethan steps into an elevator on his own, and the doors close before Libby can stop them. Moments later, Ethan is gone.

Libby thought she had been through the worst, but her nightmare is only just beginning. And in a desperate hunt for her son, it becomes clear she’s not the only one looking for him.

Who will find him first?

She climbs up onto the low wall that borders the roof, even as the police officers yell at her to stop. The brickwork scrapes her knees, but she doesn’t care. Ethan squirms in her arms as she gets to her feet, her soles raw from running. The weight of him almost takes her balance. Her toes curl over the edge. She hoists Ethan up, wraps her arms tight around him.

He cries, wrestles in her grasp, his feet kicking against her thighs, his small hands grabbing at her clothes.

The moon is reflected on the black mirror of the Gulf of Mex- ico. Between the terrace and the sea, the infinity pool surrounded by palm trees, its water calm and glassy. She imagines it now, the cool of it swallowing her whole. The calm soaking into her.

“You want to go swimming?” she asks.

He becomes still in her arms.

“You wanna?”
He nods, his head moving against her shoulder. “Yeah, go swimming,” he says, his voice so small and soft it brings heat to her eyes, a thickness to her throat.

The police officers have stopped shouting. She hears them approaching all around, their feet on the loose stones that cover the hotel’s roof. Somewhere far away, she hears a woman weep and call the child’s name.

Below, someone catches sight of her. A cry of alarm, a rising clamor of voices, chairs and tables scraping on the tiled terrace, audible above the easy music of the lounge band that plays there every night. More voices join the choir. The band’s singer falters then stops the song, his gasp amplified through the microphone, Dios mío! The music stutters and halts.

She looks down for the first time.

The people below back away as they stare up at her. Their voices bounce between the walls and balconies. A tray of drinks slips from a waiter’s hand, glass shattering, liquor spilling in fire- work patterns. She imagines her body there, sprawled, casting her own red fireworks across the tiles.

Someone says her name. She doesn’t turn her head to see him, but she hears his voice, soft and easy, like the world isn’t about to end.

“Listen,” he says, taking slow steps, drawing closer. “Just wait and talk to me. Whatever you’re going through, whatever’s driven you to this, it can be fixed. I promise you. Will you talk to me?”

She spares him a glance. It’s the security guard from downstairs.

“You didn’t mean what?” the security guard asks.

“It’s not the end,” the security guard says. “Not if you don’t want it to be. Why does it have to be the end?”

“Because I did a terrible thing and I can’t take it back.”

The security guard comes closer, slow, creeping. She sees him in her peripheral vision, turns her head to see him better. He has light-brown skin and kind eyes, gray in his hair.

“Maybe you can’t take it back,” he says. “That doesn’t mean you can’t put it right. My mother always told me, there’s nothing ever been broken that can’t be fixed.”

She looks away, back toward the sea, the glittering blackness of it.

“I know what you’re doing,” she says.

“You’re trying to get me talking, to make me come down.”

“Ma’am, I’m not trying to do anything. Sure, that’s what the police negotiators will do when they get here, but I ain’t that smart. I’m just talking. Just having a conversation, that’s all. Like people do every day. Just talking.”

She hears the brittle edge of her own voice, and it frightens her.

“I’m not crazy,” she says, and she wonders if anyone who ever spoke those words aloud spoke them truthfully.

“No, you’re not,” the security guard says, keeping his distance. “You are a sane and rational person, right? I know this isn’t you, not really. Just like I know you won’t hurt that little boy.”

“That’s right. He’s your own flesh and blood.”

The security guard is a little more than an arm’s length away. Too close. She edges farther along the brickwork. It bites at her soles.

“I’m staying right here,” he says. “I’m not moving, all right? You know, I have a little girl around your boy’s age, maybe a bit older.”

He waits for a response, but she won’t offer one.

“She’s a real firecracker, like her mother. You should see her. Half Hispanic and half Irish. I swear, she’s only four, and I aged ten years since she was born. Where was your boy born?”

“Where in Pennsylvania? Pittsburgh? Philly?”

She doesn’t answer. Everything is quiet. She gives him another glance. His face is loose, the kindness of his eyes tempered with sharp regret. He knows he asked the wrong question. He knows he’s lost her. Defeat makes him desperate.

“Give me the boy,” he says, the words quivering. “I swear to God I won’t touch you. Just let me take him.”

“Sure you can,” he says, but there is nothing sure in his voice.

“No,” she says, the finality clear.

The security guard is right. It’s not fair. She knows this. But it doesn’t make any difference.

She kisses Ethan’s damp cheek and says, “I love you.”

The breeze comes in off the ocean, warm and salty.

“God forgive me,” she says, and puts one foot in front of the other.

I don't know about you but I can't wait to start reading Lost You which I'm hoping to start reading next month as I have a few days off work with nothing much planned... although my time off does also coincide with one of my favourite tournaments of the year Wimbledon 🎾 so I might have to split my free time between reading and watching the tennis 😉
Posted by Sharon at 14:00