Today I'm delighted to welcome Ayisha Malik to the blog to chat about her latest book This Green and Pleasant Land as well as her appearance at Salisbury Literary Festival later this month. 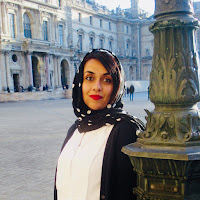 Welcome back to the blog Ayisha, I can't believe it's been 4 years since I hosted a Q&A with you on publication day for your debut novel.  Can you give us a brief recap/intro to yourself and your writing journey.  Thanks for having me back! My debut novel was Sofia Khan is not Obliged and it was followed by its sequel, The Other Half of Happiness. SKINO was a CityRead London book this year so it was nice to relive talking about my first book. More recently, my third novel, This Green and Pleasant Land, was published.

I’d always wanted to be a writer and I’d been told that the best way to get published is to work in a publishing house… I guess it worked since I spent several years working in publishing. First as a publicist at Penguin Random House and then as an editor at Cornerstones Literary Consultancy.

How did you feel to be invited to be a part of this year's Salisbury Literary Festival?  And what are you most looking forward to about your event? (Sadly I cannot attend your event due to a scheduling clash so hope to hear all about it from a friend instead).

It's lovely to be invited to a festival so close to Dorset, which is where I went to research This Green and Pleasant Land – though it’s not explicitly set there, it is very much based on West Dorset. I’m looking forward to chatting to readers and the audience about the book and the writing process.

If  you had to give an elevator pitch for This Green and Pleasant Land, what would it be?
When I first told my agent about the story I had in mind she called it a cross between The Vicar of Dibley and The Casual Vacancy. This was pleasing.


Everyone has a place they call home. But who gets to decide where you belong?

For years Bilal Hasham and his wife Mariam have lived contented, quiet lives in the sleepy rural village of Babbel's End. Now all that is about to change.

On her deathbed, Bilal's mother reaches for his hand. Instead of whispering her final prayers, she gives him a task: build a mosque in his country village.

Mariam is horrified by Bilal's plan. His friends and neighbours are unnerved. As outrage sweeps Babbel's End, battle lines are drawn. His mother's dying wish reveals deeper divisions in their village than Bilal had ever imagined.

Soon Bilal is forced to choose between community and identity, between faith and friendship, between honouring his beloved mother's last wish and preserving what is held dear in the place that he calls home.

How did the title come about?  (I'm assuming it has some relation to the lyrics in William Blake's poem).

My very clever editor chose the title. And it was fitting since I was a fan of Blake’s poetry when I was in school.

Your first two novels were set in the bright lights of London, what sparked the idea for your latest novel and why did you choose to set it in the heart of the Dorset countryside?

I think it’s important for writers to step outside their comfort zone. They say to write what you know, which is what I did with the Sofia Khan books, but if I’m always writing about what I know then I don’t think I’m challenging myself as a writer. I also think that in the wake of Brexit we’ve been forced to re-think about ideas of Britishness and Englishness – not least what a bubble we Londoners live in and how it’s not really reflective of the UK as a whole.

A friend (and my ex-boss from Cornerstones Literary Consultancy) lives in Dorset and she very kindly helped to set me up with a place in Dorset, also introducing me to the locals and helping me to navigate my way around.

What comes first for you – characters or plot?
Usually plot, but they’re always linked to a character, so I guess they both come to me at the same time.


Your novels have been quoted as being 'witty', 'funny', and 'uplifting', what drew you into writing novels with comedic elements?  And have you ever considered your hand at writing in a different genre, if so, what?
I hope they live up to their reputation! Austen was a huge influence for me, and I’ve always been drawn to comedy. Shows like Friends and writers like Nick Hornby and Nora Ephron have always delighted me. I had tried my hand at something more serious but it didn’t quite work. I don’t think I’d ever go back. I feel, with This Green and Pleasant Land, I’ve found both my style and literary voice.

When you're not in the midst of writing/editing, what type of books do you like to read for pleasure?
Any recommendations from friends or on Twitter, but I don’t read a lot of crime or what people would call genre fiction, I guess. Right now I’m reading David Nicholls’ (another favourite writer) new book Sweet, Sorrow. I’ve been away, travelling, and a few of the books I read were Look at Me by Anita Brookner, Death by Julian Barnes (fun! taken from his non-fiction Nothing to be Frightened of) and The Friend by Sigrid Nunez. I suppose I like books that are literary and/or high end commercial (whatever that’s meant to mean!).

And finally what can we expect from you next?
I have some children’s books out next year, which I’m excited about – one of them being a children’s retelling of long time hero Jane Austen’s Mansfield Park. This was a huge honour and privilege considering how much her books have meant to me.  I’m also beginning work on my fourth novel, which takes us away from the UK and to the USA.

Thanks to the generosity of Tom Bromley, the festival director of Salisbury Literary Festival, I have a pair of tickets to give away to Ayisha's event at Salisbury Guildhall.  So if you're local to Salisbury or can travel to Salisbury for the event on 19th October, enter via the Rafflecopter form below.

*Terms and Conditions*  The winner will be selected at random via Rafflecopter from all valid entries next Thursday and their email address passed onto the organisers of Salisbury Literary Festival to email the tickets.  Any personal data given as part of the competition entry is used for this purpose only and will not be shared with third parties and will be deleted once receipt of the prize has been confirmed.

a Rafflecopter giveaway All book titles in bold are Amazon UK Affiliate links which will earn me a few pence if anyone clicks through and makes a purchase - any money earned will go towards buying books or gifts for giveaways.
Posted by Sharon at 06:00