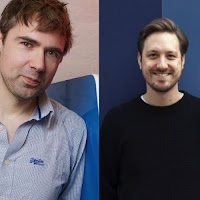 Keith Stuart is a journalist who has been covering video games and digital culture for over 20 years, he has written for numerous publications and is the video games correspondent for The Guardian. His bestselling debut novel, A Boy Made of Blocks, which was inspired by Keith’s relationship with his autistic son, was selected for the Richard and Judy Book Club. His second novel, Days of Wonder, was published in February.

Tom, devoted single father to Hannah, is the manager of a tiny local theatre. On each of her birthdays, its colourful cast of part-time actors have staged a fantastical production just for her - a day of wonder. However hard life gets, all Tom wants to do is make every moment magical for her.

Now, as Hannah begins to spread her wings, the theatre comes under threat of closure and the two could lose one another. But maybe, just maybe, one final day of magic might just save them both.
Richard Roper is a non-fiction editor at Headline. His debut novel, Something To Live For, was inspired by an article he read about the council workers who deal with situations when someone dies alone. A warm-hearted and humorous novel in the vein of David Nicholls and Nick Hornby, it was published by Orion in June.

Sometimes you have to risk everything to find your something...

All Andrew wants is to be normal. He has the perfect wife and 2.4 children waiting at home for him after a long day. At least, that's what he's told people.

The truth is, his life isn't exactly as people think and his little white lie is about to catch up with him.

Because in all Andrew's efforts to fit in, he's forgotten one important thing: how to really live. And maybe, it's about time for him to start.
And thanks to the organisers of the festival I have a pair of tickets for Keith and Richard's event to give away. So if you're local to or can travel to Salisbury for the event on 19th October, enter via the Rafflecopter form below.

*Terms and Conditions*  The winner will be selected at random via Rafflecopter from all valid entries next Thursday and their email address passed onto the organisers of Salisbury Literary Festival to email the tickets.  Any personal data given as part of the competition entry is used for this purpose only and will not be shared with third parties and will be deleted once receipt of the prize has been confirmed.

a Rafflecopter giveaway All book titles in bold are Amazon UK Affiliate links which will earn me a few pence if anyone clicks through and makes a purchase - any money earned will go towards buying books or gifts for giveaways.
Posted by Sharon at 08:30