Today it's my pleasure to be shining the spotlight on author David Western and his debut novel Gertie's War which was published in September. 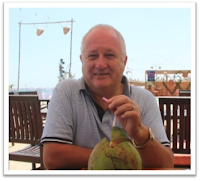 Can you tell us a little bit about yourself and your writing journey?
I’m married to Sandra, (a Mumbles, Swansea girl) and am a father and a grandfather.

I was born too many years ago in Ripon, Yorkshire. My father served in the RAF and so I had a rather nomadic childhood, moving every 2-3 years. Which undoubtedly had a significant impact on my personality and not all of it good.

I ended up working for a national bank for thirty-nine years and had some great experiences. It’s not as boring a career as people imagine, especially as I finished up in an investigator/inspection role.

My banking career also involved several relocations until I arrived in Pembrokeshire, West Wales, where I’ve lived for over thirty years.

When did you start writing?
I think I’ve always had an interest in reading, writing and history. I didn’t do as well in my A-levels as I should have done because I became diverted by the desire to write an epic sci-fi novel. It took preference over study and revision but that’s what happens when the writing bug strikes. I dabbled in writing short pieces over the years, always wishing I could find that story that is said to be inside all of us. Where was mine?

Shortly after retiring I revived my lifelong passion for writing by attending local Creative Writing classes. The result has been a book of short stories, plays and poems for family and friends, and Gertie’s War.

What made you write Gertie’s War?
I had no choice, she became a real pest, nagging for her story to be told. Out of nowhere, the inspiration for Gertie’s War came from a creative writing class exercise which triggered a series of “what if?” questions that I had to investigate. In addition, several things that I read about around that time, lead and fed the story’s direction. Telling her story became a definite obsession. It took me about a year to write, edit and re-edit several times.

What advice would you give to other aspiring authors who are thinking about writing a novel?
Find an idea that excites you and give it a go. Realise from the start that it is a long process and can be very frustrating, as well as rewarding (in a non-monetary sense!). Once written, rewrite and edit and rewrite. Then get others to help read and edit.

I heard that it is best to write about things you know about and I made the mistake of taking this to mean penning something set in a banking environment. What I’ve learned is it means to include your life experiences, things you’ve seen, heard and read and use them to add flesh to your novel. Give each character a separate ‘voice’ in your head.

Tell us about researching for your novel.
Even before starting Gertie’s War, I’d read many books and articles, watched many films and documentaries about the war and Nazi Germany. Once the writing began, I did a lot of research on the social history of the period. I learned that the secret is to research in depth. I thought my notes might end up longer than the novel at several stages. You need to know the setting yourself in order to make things real in your mind. Find the odd, shocking, humorous and interesting things that you can build into the story to give added realism to the tale. But don’t overdo it. As I say, my novel is a story not a history. I had to leave most of my notes out of the novel to stop it becoming an information dump rather than a tale of fiction. Keeping it in mind, though, helps me to write in the period and with a flavour of the times.

Don’t forget to check that everything fits into the period you’ve chosen, including the slang. Don’t have the caveman zipping up his furs.

Tells us a bit about the novel.

Housewife Gertie is happily married to railwayman Albert in Germany, during the latter years of WW2. Her son and brothers are away fighting and Albert wants to join up too. Gertie is resiliently enduring the hardships of war, in early 1944. Like millions of others, she believes the Nazi propaganda that’s fed to her. Then one day a knock on the door changes her life forever. An innocent action on Gertie’s part, has started a terrifying chain of circumstances, in which she suffers at the hands of a powerful man determined to use her for his own purposes. She meets other victims of the Nazi legal system and experiences the terror of an air raid. Her beliefs and values are challenged as never before and she begins to question long held and official attitudes and actions. With only the love for her husband and family to keep her going, will it be enough? Can she get back to the family and the life she once knew?

The story is about events that happen to Gertie which cause her to question her beliefs about the way Germany is being run and the actions of the Nazi State. It shows life from a German point of view and how a family can be ripped apart by the State and by events.

Why did you choose to write with a female lead?
I don’t recall ever given it a thought. Her storyline in my head just flowed and seemed so natural. With hindsight, I think it would have been a very different story with male ego and macho feelings getting in the way. I was very pleased when Dr Carly Holmes, Editor / Marketing Officer at Parthian books said, “Strong characterisation, particularly for Gertie. She feels very authentically female. Her often contradictory internal thoughts running alongside her exchanges with Albert are a nice touch.”

What are you working on now?
I’ve had so many requests to say what happened to the main characters, that I’m now working on the sequel to Gertie’s War.

Some examples of my short stories and an extract from Gertie’s War are available on my website: www.davepw.co.uk
Posted by Sharon at 06:15