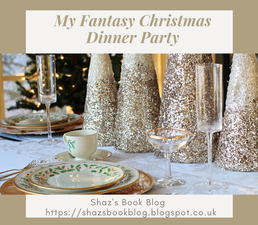 Tonight I'm handing the reins of the blog over to fellow blogger Llainy from So Many Books, So Little Time to host her Fantasy Christmas Dinner Party, so who would she invite?

Stephen King for sure, apparently he never goes to cons, much book events or anything like that.  King is the reason I love reading/horror, I started reading when I was about 8, IT was my first book.   I think he has an amazing mind and made so many creations, I have many questions about some of his endings and I just think he would make for great chat.

A fictional character or characters, John Coffey from The Green Mile (Stephen King) the guy does miracles and ends up on death row, he is a great character but we know practically nothing of his back story. He had such a crap roll of the life dice, I would like to hug him, show him a little kindness considering all the good things he done despite having so much bad/evil flung his way.

Kimberley Chambers, crime/gangland author.  I met her once and she is always so nice, chatting to readers/authors online.  Her stories are hillarious, the antics with Vinnie the cat and her pals wee dogs she dog sits every so long.  You could listen to her stories all day.

J K Rowling, I am a huge Harry Potter fan I LOVE the series, the movies and think she has created such an amazing world for kids and adults alike.  I would love to pick her her brain on so much.  I also went a wee walk through the graveyard she got some of the names for her characters I think she would be a great dinner guest.

Another character  I would bring would be Professor Snape from Harry Potter, he is one of the most argued about characters in the fandom.  He was  bad, he was good, he was a bully, he was misunderstood.  So so many questions plus imagine J K Rowling/Stephen King getting to have dinner with two of their characters!

So I don't know if you know but I am a food freak, I have so many twitchy issues with food.  Certain foods can't touch (I used to have separate plates for all my food but I am much better these days, not great but much better, I have a plate separator for stressy days lmao).  So I think I would maybe go with a buffet, finger food type stuff.  I would have the type of stuff we put out at new year, mums old party suzie with cheese pickles and hot dogs, crisps, sandwiches, ferrrero rocher cos you need the "gold" with such a line up.  Pepsi max for moi and I would do a mix of like pizza fingers and general buffet food.  Ideally nothing nippy, I hate spicy food but would do separate dishes if the guests like spice.

All book titles in bold are Amazon UK Affiliate links which will earn me a few pence if anyone clicks through and makes a purchase - any money earned will go towards buying books or gifts for giveaways.
Posted by Sharon at 18:00