The Write Stuff with... Margaret Rooke

Today it's my pleasure to hand the reins of the blog over to author Margaret Rooke to talk about what inspired her to write You Can Change the World!

At 14, Lucy Gavaghan walked into Tesco head office after years of letter writing and petitions, and persuaded them to stop selling eggs from caged hens. She believes her age helps her with her animal rights campaigning. “There must be something about being a teenager that makes this a great point to look around and think, ‘Is this the kind of world I want to grow up in?’” she says. “I don’t let myself overthink what I’m doing. Everything seems so clear to me.”

Lucy is one of more than 50 ‘everyday heroes’ in my book ‘You can Change the World!’ All are making a difference in their own lives, in their communities and in the wider world. They are role models for their classmates, inspiring them to feel empowered to make their own changes – so important when many teens feel unsure about how to deal with the challenges they face.

Research shows that the people who most influence teenagers are other teens, and this can be transformational if the young people they are looking up to are achieving something positive in the world.

My other reason for interviewing teens, was to begin to break down the stereotypes that exist. Today’s teens are often viewed as a generation of ‘snowflakes’, unable to cope with the mildest of criticism, obsessed with celebrity, shopping and self-promotion; and, of course, another extreme stereotype exists: one revolving around gang membership and violence.

I wanted to challenge the way teens are pigeonholed in these ways. A recent RSA poll asked adults to choose from a list of words that might describe teenagers and the most popular they chose were ‘selfish’, ‘lazy’ and ‘antisocial’. However in the same survey, 84% of young people identified with the phrase, ‘I want to help other people’. Adults need a reality check.

So while I’ve had powerful feedback from children as young as nine that they find the book inspiring, I’ve also heard from adults that it’s given them hope for the future, as well as topics to help break unwanted silences with their own sons and daughters.

The teenagers in the book are ordinary and extraordinary at the same time. They are volunteers, social entrepreneurs, fundraisers, campaigners, or simply young people making the right choices in difficult circumstances. They talk about dealing with bullying at school, upcycling clothes for the homeless and preserving Britain’s beaches.

Seventeen-year-old, Cameron Osburn, left on the subs bench at football because cerebral palsy meant he couldn’t run as fast as the others, founded his own football team for children with disabilities: Adversity United.

I spoke to Amika George, 19, at the forefront of the campaign against period poverty, and Maya Ghazal, also 19, a refugee from Syria who is now an advocate for refugee rights, as well as studying to become an Aviation Engineer. There’s Zainab Gulbano, 17, who thought she’d always be the class clown but now channels her energy into helping rebellious kids as a youth worker at her old school, and Amarni, 17, who stepped away from the fringes of gang violence and now inspires teenagers at a youth centre to focus on their love of music.

These teens show that when they have a vision for the changes they want to see, they are well placed to reach out for it. They are often social beings, wanting to make contact with others and spread the word and, of course, they know how to use social media to its best advantage.

Maya Ghazal says, “Teenage years are when we have energy and enough compassion to do something we believe in. With the power that we have, the sky’s the limit.”

And climate change campaigner Katie Hodgetts says it straight. “It’s not young people who started wars or created the messes we find ourselves in today.

“As you get older it’s easier to believe that power lies at the top and you no longer feel that miracles can happen. When you’re young you have a sense of optimism. You can see the world as a blank canvas. You can paint this in any way you want.

This inspirational book tells the stories of more than 50 of today's teenagers who've dared to change the world they live in. It's been written to show other teens they can do the same. Bestselling author Margaret Rooke asks teens about their experiences of being volunteers, social entrepreneurs and campaigners, online and beyond. They explain how they have survived in a world often obsessed by celebrity, social media and appearance, by refusing to conform to other's expectations.

If you want to achieve against the odds and create genuine impact, this book may be the encouragement you need. The interviews cover race, sexuality, violence, grief, neurodiversity, bullying and other issues central to life today.

Read about teens from around the world including
- Trisha, 18, who has invented a way of preventing bullying online
- Dillon, 18, who takes damaged and donated clothing and upcycles it for the homeless
- Guro, 13, who persuaded a pop band to portray women differently in its video
- 'Happy D', 19, who learned to read at 14 and found ways to build his confidence
- Heraa, 19, who fights Islamophobia online.
- Ruben, 18, bullied because of Down's Syndrome, now a successful actor
- Lucy who, at 14, walked into Tesco head office and persuaded them not to sell eggs from caged hens.
- Cameron, 17, who has cerebral palsy and was side-lined by soccer teams who set up his own team 'Adversity United'
- Alex, 18, who broke his back on his 15th birthday and says his injury has taught him to care for others
- Amika, 18, who fights 'Period Poverty'
- Jesse, 15, who's seven feet tall and embraces his stature
- Billy, 18, who wore full make up every day at high school 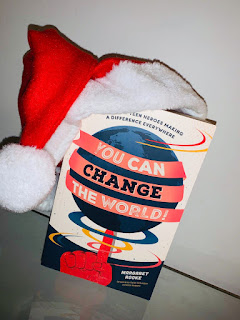