Today it's my pleasure to be shining the spotlight on Drēma Drudge and her debut novel Victorine which is published today. Congratulations Drēma. 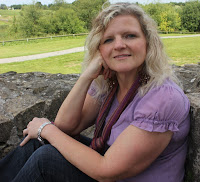 Drēma Drudge suffers from Stendhal’s Syndrome, the condition in which one becomes overwhelmed in the presence of great art. She attended Spalding University’s MFA in Creative Writing Program where she learned to transform that intensity into fiction.

Drēma has been writing in one capacity or another since she was nine, starting with terrible poems and graduating to melodramatic stories in junior high that her classmates passed around literature class.

She and her husband, musician and writer Barry Drudge, live in Indiana where they record their biweekly podcast, Writing All the Things, when not traveling. Her first novel, Victorine, was literally written in six countries while she and her husband wandered the globe. The pair has two grown children.

In addition to writing fiction, Drēma has served as a writing coach, freelance writer, and educator. She’s represented by literary agent Lisa Gallagher of Defiore and Company.

My debut novel, Victorine, features Victorine Meurent, a forgotten, accomplished painter who posed nude for Edouard Manet’s most famous, controversial paintings such as Olympia and The Picnic in Paris, paintings heralded as the beginning of modern art. History has forgotten (until now) her paintings, despite the fact that she showed her work at the prestigious Paris Salon multiple times, even one year when her mentor, Manet’s, work was refused.

Her persistent desire in the novel is not to be a model anymore but to be a painter herself, despite being taken advantage of by those in the art world, something which causes her to turn, for a time, to every vice in the Paris underworld, leading her even into the catacombs.

In order to live authentically, she eventually finds the strength to flout the expectations of her parents, bourgeois society, and the dominant male artists (whom she knows personally) while never losing her capacity for affection, kindness, and loyalty. Possessing both the incisive mind of a critic and the intuitive and unconventional impulses of an artist, Victorine and her survival instincts are tested in 1870, when the Prussian army lays siege to Paris and rat becomes a culinary delicacy, and further tested when she inches towards art school while financial setbacks push her away from it. The same can be said when it comes to her and love, which becomes substituted, eventually, by art.


I am called The Shrimp, Le Crevette because of my height and because I am as scrappy as those little question-mark-shaped delights that I used to study when my father took me to Les Halles. I would stand before the shrimp tank and watch the wee creatures paw at the water, repeatedly attempting to scale the tank, swimming, sinking, yet always rising again. I hoped eagerly for one to crest the tank, not realizing until later that the lid was there precisely to prevent their escape.

So why am I reminded of that tank today?

Today, while I am giving a guitar lesson in my father’s lithography shop, the gifted yet controversial painter, Édouard Manet, enters the shop. He gives me the nod.

I cover the strings of my guitar with my hand to silence them.

Pѐre has mentioned Manet’s recent patronage of his shop, of course, but I have never been here when the artist has come by.

“And where is it we have met, Mademoiselle?” he asks, wincing as he looks in the vicinity of my nose.

Is this a snub? I run my hand over the swollen, crooked lump of flesh on my face.

“I must be mistaken.” I turn away, smiling bitterly at my quick temper, at my trying to turn up a nose such as this. Of course he doesn’t recognize me.

I motion for my student to put her guitar away: “That’s enough for today, dear.” Though she looks at the clock with a puzzled brow, she does as I say.

My father graciously allows me to give lessons in his shop, claiming he loves to hear young musicians learning to play, though I suspect it’s more because my mother hates allowing anyone into our house besides her regular millinery clients.

Manet moves toward me, puts his face close to mine; I don’t pull away, but only because that is the way painters see.  I would have punched another man for standing so close. He snaps his fingers. “Le Crevette?” he exclaims, backs away.

I raise my chin to regard the posters on my father’s wall. The Compagnie Francaise de Chocolats et des thes declares my father’s fine sense of color, his signature mingling of coral and scarlet. The other posters reveal his repeated twinning of these colors.

Manet grasps my hand with frank friendliness that I almost believe. Want to believe. “It is you; I’ve seen you model at Coutoure’s. But what has happened to your nose?”

I rise on my toes, though the height it gives me is minimal. I motion for Gabrielle to gather her music, and she shuffles the sheets.

I move closer to him while withdrawing my hand from his, take out my emerald green enamel cigarette case (a gift from a wealthy student at Coutoure’s studio) and light a cigarette. I empty my lungs straight at the yellowing ceiling, though my torso is not a foot from his.

My father frowns and waves the smoke away; how many times must I tell him that I am eighteen and I will smoke if I please? He smokes a pipe sometimes. What’s the difference?

“I give guitar lessons now. Obviously, I’m no longer a model.”

Manet’s eyes graze on me. I stand straighter. When I realize it, I relax.

“I know just how I’ll paint you. Shall we say tomorrow at one?”

My father runs his grungy shop cloth through his hands.

I raise my chin, art lust in my eyes.

He crooks his eyebrow. “Wear something else, will you? That frock does nothing for your apricot skin tone, much less your eyes. And wear your hair down….” He touches a section of my red hair that flows forward, and I jerk away. “No. Better wear it up.”

I glance down at my mud-colored calico dress, pick up my guitar case and make to lead my young charge out the door.

“Meurent?” he says. I smile, erase it before turning back.

“Do you know where my studio is?”

“You may leave your card with my father.”

I am well aware of the opportunity I have been offered. If it weren’t for this trouble with Willie, I would be ecstatic. As it is, I am just a flicker beyond moved.

For more about Drēma and her writing, art, and travels, please visit her website, www.dremadrudge.com, and sign up for her newsletter. She’s always happy to connect with readers in her Facebook group, The Painted Word Salon, or on Instagram, Twitter, and LinkedIn.
Posted by Sharon at 06:30