The Write Stuff with... Catherine Kullmann

Today it's my pleasure to hand the blog over to author Catherine Kullman to talk about the Regency era which is the time period her novels are set.

Thank you for inviting me, Sharon. My books are set in England in the extended Regency period between 1800 and 1830 and I would like to share with your readers the political and social background of the time.

It is the beginning of our modern society. The Act of Union between Great Britain and Ireland of 1800, the Anglo-American war of 1812 and the final defeat of Napoleon at the Battle of Waterloo in 1815 are all events that still shape today’s world. At the same time, the ruling aristocracies were being challenged by those who saw the need for social and political reform, while the industrial revolution which led to the transfer of wealth to the manufacturing and merchant classes was underway. Women, who had few or no rights, had begun to raise their voices, demanding equality and emancipation.

In 1803, with the collapse of the Treaty of Amiens, Great Britain and Napoleonic France were once again at war. Over the next nine years, as Napoleon marched ever further eastwards, finally invading Russia, British forces attacked from the west, defeated him at sea and began to drive his army back from the occupied Iberian Peninsula (Portugal and Spain). In 1812 he was forced to retreat from Russia with the loss of almost five hundred thousand men. As the remnants of the Grande Armée struggled home, Wellington continued his march through Spain, driving the French before him until, in 1814, his army crossed the Pyrenees and entered France.

Napoleon abdicated and was exiled to the little Mediterranean island of Elba. The peace was shattered by his escape less than a year later. When he landed in France, the French army rallied to him and, on 20 March 1815 as the recently restored King Louis XVIII fled, he entered Paris in triumph to reign for a final ‘hundred days’. On 18 June 1815, allied forces led by the Duke of Wellington and French forces commanded by the Emperor himself, met not far from the village of Waterloo, near Brussels. Napoleon was finally defeated. He abdicated again and was exiled to the remote Atlantic island of Saint Helena where he died almost six years later.

Unlike the other combatants in this long war, Britain was spared the havoc wrought by an invading army and did not suffer under an army of occupation. The war happened off-stage and far away, with no news reaching home apart from that provided in official dispatches and what little was contained in the intermittent private letters of officers and those soldiers who could read and write.

But the war had to be paid for. The unpopular income tax, which was introduced for the first time in 1798 and abolished in 1802 after conclusion of the Peace of Amiens, was reintroduced in 1803 as a ‘contribution of the profits arising from property, professions, trades and offices’. Trade was depressed by Napoleon’s continental blockade. This led both to increased unemployment and rising food prices.

And then there was the human cost, bitterly felt by families whose menfolk were fighting abroad but otherwise accepted as the price of victory. For twelve long years, ships carrying fathers, lovers, husbands, sons and brothers sailed over the horizon. Over three hundred thousand men did not return, dead from wounds, accidents and illness. 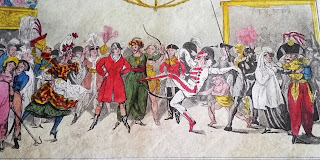 What did this mean for those left behind? The question would not leave me and it is against this background of an off-stage war that I have set my novels. How long did it take, I wondered, for word of those three hundred thousand deaths to reach the bereaved families? How did the widows and orphans survive? What might happen to a girl whose father and brother were ‘somewhere at sea’ if her mother died suddenly and she was left homeless? It was a patriarchal society, where women, and married women in particular, had very few rights; a society that assumed women would be protected by their menfolk but took no account of the situation of those who were deprived of that protection.
Legally, an unmarried woman or a widow was a feme sole or single woman who could own property and manage her financial affairs. Once she married, she became a ‘feme covert’, literally a covered woman. Her own legal existence was suspended; she was regarded as being one person with her husband and her property became his. He was entitled to dispose of her earnings and any inheritance she might receive. He could decide where she lived. She could not refuse him his ‘marital rights’—common law at that time decreed that there could be no rape within marriage as the consent implied in the marriage vows was consent for ever and could not  be revoked. She had no claim to her children—her husband could remove them from her care at whim. If she left him, he could sue her for restitution of conjugal rights i.e. that she should return to live with him. Failure to do so could be punished by imprisonment of up to six months. Divorce was hideously expensive and very rare. It required a special act of parliament, and, while a husband could divorce his wife on proof of adultery, a wife seeking to divorce her husband must prove not only his adultery but also other very grave breaches of his marriage vows that were not easy to prove.

Given the disadvantages, it is a wonder that women married at all. But for many it was the only hope of security. Working-class incomes were so low that parents could not support their daughters indefinitely, and women were even more poorly paid than men. The tenuous positions of governess or companion open to ladies did not offer much more security—they too were poorly paid, subject to the whims of their employers and, not infrequently to their unwanted attentions. A double standard in sexual matters was strictly enforced and a lost reputation, no matter what the cause or the truth behind it, left many women with no alternative to prostitution.
It is against this background that my books are set. My characters and their stories are fictional but the world in which they live is very real and there are no twenty-first century solutions to their dilemmas.

In my new book, The Potential for Love, when Arabella Malvin sees the figure of an officer silhouetted against the sun, for one interminable moment she thinks he is her brother, against all odds home from Waterloo. But it is Major Thomas Ferraunt, the rector’s son, newly returned from occupied Paris who stands in front of her.

For over six years, Thomas’s thoughts have been of war. Now he must ask himself what his place is in this new world and what he wants from it. More and more, his thoughts turn to Miss Malvin, but would Lord Malvin agree to such a mismatch for his daughter, especially when she is being courted by Lord Henry Danlow?

As Arabella embarks on her fourth Season, she finds herself more in demand than ever before. But she is tired of the life of a debutante, waiting in the wings for her real life to begin. She is ready to marry. But which of her suitors has the potential for love and who will agree to the type of marriage she wants? Who can she trust with her future happiness? 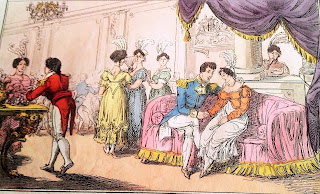 Thank you for your interest in my writing. You can find out more about me and my books at