The Write Stuff with... Elizabeth Jade

April is Autism Awareness Month so it's my pleasure to welcome Elizabeth Jade to the blog to talk about how autism has influenced her life and writing. 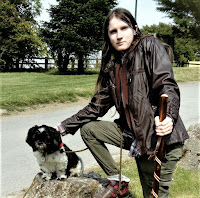 I was the child that struggled to fit in, but no-one knew why; the child who could tell you everything that had been going on around them all day, but couldn’t remember what the lesson was about; who heard the teachers instructions, but still didn’t know what to do and got told off for not listening. And I was the child who hid when the vacuum cleaner came out at home, even in their teens - My name is Elizabeth Jade. I’m a children’s author and animal lover living in the UK, and this is my story.

I was born in North Yorkshire in 1998 and moved to Somerset when I was quite young. My parents had always accepted my uniqueness and even took me out of school in favour of child led learning when school was making me ill all the time. I started writing when I was fourteen, around the time I began to struggle with depression and anxiety. After several years, my mother insisted that I see someone about my mental health.  I have to say that my experience with CAMHS (Children and Adolescent Mental Health Service) was not at all pleasant, but it was here that the possibility of Aspergers was first explored, leading to my diagnosis just before I turned eighteen.

People have never made sense to me.  In fact, I still make a habit of avoiding contact with them as much as possible.  I’ve always had a natural connection to animals and have volunteered at a number of animal rescues in my area. I believe animals make far more sense than people.  That’s probably why the main characters in my current books are wolves and huskies, and why these stories are told through the eyes of the animals themselves. Although the Akea series is primarily aimed at children age 7 to 11, it has been enjoyed by older children and adults, and read to younger children by their parents.

I had no idea the influence autism actually had on my writing until after I’d published my first children’s book, Akea – The Power of Destiny, in 2017. Several people commented on the parallel between Akea’s journey of discovery and my own. Akea is born into a family of huskies, but there is something different about her and she soon realises that her true destiny lies beyond the relative safety of her sled dog family. Akea begins the story feeling out of place where she should belong, overcomes obstacles, and ends up fitting in where she stands out the most. In the same way, I’ve had to overcome obstacles and feeling that I didn’t fit in, but now I understand it’s okay to be different and I have found my place in the world as an author.

Akea – The Power of Destiny came into existence purely by accident. Like many people with autism, I get easily overwhelmed with too much information, so rather than have written character profiles, I prefer to have visual ones.  I search the internet for photos that ‘feel right’ for my main characters, and I keep these in front of me when I’m writing. While searching for a dalmatian picture for a story I planned to write, I came across one of a dalmatian with a husky. It felt as if the husky was telling me her own story and I felt compelled to write it down. Incidentally, the dalmatian story was never written.

I was so inspired by the story arc that I went on to write the sequel which was published in December 2019. Akea – His Mother’s Son takes up the story sometime after Akea’s rise to Wolf Queen at the end of the first book. Akea’s world turns upside down when humans raid their home, scattering the pack and capturing her hybrid son, Salvador. The dual narrative enables the reader to feel both sides of the experience of loss and change, and to watch Salvador grow from a wayward cub into a confident and resilient adult with an unusual talent. One reviewer said “Elizabeth Jade perfectly captures the atmosphere of life as part of the wolfpack and its many challenges.  Her stories remind me of Jack London’s ‘Call of the Wild’ and she not only has a knack for creating realistic and powerful characters, but a talent for describing the wild settings they inhabit with a natural confidence that is quite charming.” I found his words so encouraging.

I’m currently working on the next five books in the Akea series. I’m fortunate to be able to jump in and out of each of these books without getting confused.  I’m a compulsive multi-tasker anyway. I’m usually researching, writing and watching random YouTube videos at the same time. I think this is one of the advantages of having a form of autism. One of the disadvantages of autism is my difficulties with people. I can’t handle the usual school’s visits or author events that many authors use to reach their target audience. This makes marketing a bigger challenge for me than it already is for most authors. Although my books are available online, I am proud to have them on sale in a number of independent bookshops in the UK and I am grateful for their support.

I have included my autism diagnosis in the author bio on the back of my books and mentioned it in various newspaper articles and guest blogs in the hope it will inspire others. I’ve also donated copies of my books to the Somerset Autism Collection at my local library. In fact, Akea – The Power of Destiny was the first book in the collection to celebrate the achievement of someone with autism rather than supporting them with it.

Many of those on the autistic spectrum understand what it means to be different. For us to be true to ourselves undoubtedly requires a certain amount of courage.  For me, having Aspergers and mental health issues can make life a real challenge, but with the right support, I was able to make my dream of becoming an author come true.