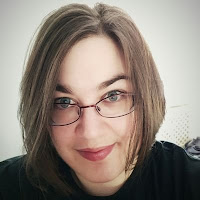 Today it's my pleasure to be shining the spotlight on author Chrissey Harrison and her debut novel Mime which was published this week.

Chrissey is an author of supernatural thrillers and other spec genre fiction featuring monsters, magic, action and adventure, and fragile human characters trying to muddle through as best they can. They make mistakes and bad choices sometimes, and they have to learn to recognise their own strengths and weaknesses and turn to their friends and loved ones for help and support.

Her debut novel, Mime, was published in July 2020. Working on this book has been an epic 10 year journey learning how to be a writer. In that time she has published multiple short stories including novelette The Star Coin Prophesy and most recently Henchman in the anthology Forgotten Sidekicks from Kristell Ink.

She is a science geek, gamer, fan of sci-fi and fantasy, and wearer of many hats. Metaphorical hats, that is, not so much real hats. At the moment she mostly wears her writer hat, her graphic designer hat and her crafter hat.

She lives in Clevedon, North Somerset, in a creaky old Victorian terrace with her partner and her 18 year-old goldfish, Ambition. You can follow her fish on Twitter if you like (@AquariumDays). One day she will own a cat... one day.

Can you tell us a bit about yourself and how your writing journey started?
Hi Sharon, thanks for having me on your blog. I’m Chrissey and I’ve been writing seriously for about 10 years now. I used to dabble in fiction as a kid and as a teen, but I drifted away from it in my early 20s. When I was 26, I was making a short film with a group of friends and in that creative atmosphere the idea for Mime was born. Thinking back on my younger years and my passion for fiction, I decided to have a go at writing the idea as a novel. I mean how hard could it be?

Answer? Hard! I quickly realised I had a lot to learn. Mime has routinely been on the back burner while I built up the toolkit of skills to do it justice. The good thing was that the challenge never put me off. I’ve loved every minute of the journey.

If you had to give an elevator pitch for your debut novel Mime, what would it?
“Paranormal journalist takes on demon mime artist.”

Or if it’s a tall building with a lot of floors:

What starts out as an investigation into several unnatural deaths turns into a cross country quest which takes journalists Elliot and Sam to dusty libraries, secret crypts and forgotten tunnels. For Elliot the journey is about discovering his true purpose in life and forgiving himself for past mistakes. For Sam it’s about accepting her past trauma and facing her fears.

There’s a supernatural killer on the loose...

Elliot Cross didn’t believe in monsters. At least, not until his brother died at the hands of something unnatural.

Four years later and a string of impossible deaths leave the police baffled. Consumed by a desire to shine a journalistic light on the supernatural world, Elliot sees a chance to make a difference. Enlisting the help of his (only) employee, Samantha, he quickly identifies the culprit – a demonic mime artist whose invisible creations are fatally real.

Way out of his depth, Elliot’s only hope is renowned demon hunter Gabriel Cushing. But tracking down Gabriel is only the beginning… The search for a way to end the demon forever will take Elliot and Sam across the country, uncovering lost history, buried secrets, and a few new truths about themselves.

Which comes first for you, characters or the plot?
In a way, both. I tend to start with one or two scenes in which neither the plot nor the characters are fully formed in my imagination, but in which I have an idea for how the two things might collide. I use those scenes to explore the characters and the plot and work outwards.

Most of the time those scenes will get completely re-written or cut later. They serve as a way in to discover something bigger.

What attracted you to writing in the supernatural genre? And what do you think are the essential ingredients needed for supernatural/fantasy novels?
I enjoy reading all kinds of genre fiction but I particularly love urban fantasy – the combination of the real world combined with the fantastical. The mundane with the extraordinary. I love exploring folklore, myth and history to discover themes and ideas I can draw on. It’s about creating a version of our world with more possibilities, more danger and excitement, and with different meaning.

The essential ingredient is getting the balance right. If you can make it feel like the real world you can make it relatable, even when you then introduce demons and magic. It’s also important to be distinctive with your take on the supernatural – how you pick, choose and combine aspects of existing lore and where you add your own unique ideas, twists and details.

If you could have a supernatural power yourself, what would you choose and why?
This is always such a difficult question to answer! I’m often wishing for more time. I would like to be able to do more in less time and still have plenty of time for sleep and reading and relaxing, so maybe the ability to slow down time would be useful.

What is the first book that you read that made you think 'I would like to write something like that one day'?
That would be Kelley Armstrong’s Dime Store Magic. Not so much because of the plot, but because of the characters, their relationships and how they grew. For example, the love interest in Dime Store Magic, Lucas, is a kind of nerdy guy with glasses who relies on his wits and intelligence, cares about people and respects boundaries. Which is a description that could just as easily apply to Elliot in Mime, though there are also a lot of differences between them.

I found my first writer’s group on the Kelley Armstrong fan forum and learned a lot directly from her advice. She has been a very influential role model for me.

What advice would you give to any other aspiring authors?
For anyone just starting out, be pragmatic, be realistic – it can be a long journey, with lots of ups and downs, and it’s important not to let the scale of the challenge put you off trying. Don’t rush, and don’t put too much pressure on yourself.

In terms of how to make progress on that journey my advice is not to go it alone. A writing group, either online or in person, or even just one writing buddy you can share your work with will do more to improve your skills than anything. It also does wonders to keep your morale up.

If you could write in a collaboration with another author, who would you like to write with and why?
I’m not sure my chaotic process lends itself well to collaboration! Or at least, not on a single piece of writing. But collaborative anthologies are great projects to be involved with. I’ve done a few with other indie authors. As to who I’d want to work with? I’d pick Neil Gaiman. I imagine he’d be very encouraging and enthusiastic with less experienced authors.

And finally what can we expect from you next?
Right now I’m working on both a sequel and a prequel to Mime.

Hunters is the second novel in the Weird News Series. Something has been desecrating the graves of the recently interred. Then the police officer investigating the disturbances is killed and horrifically dismembered. A friend on the force calls Elliot in to consult. Along with some new allies, he and Sam uncover some dark history and malevolent supernatural forces. Meanwhile Sam is also searching for answers to questions about herself and her abilities.

The prequel novella, A Way to Make a Difference, reveals a little bit more of Elliot’s back story. Six months after the death of his brother (about 3 years before Mime), he’s at his lowest point and looking for answers. A supernatural encounter and a new friend open his mind to different possibilities for his future. And the best part is it’ll be a free eBook for my readers.