Today it's my pleasure to be shining the spotlight on author Roz Levens and her debut novel Pack of Lies which was published last month. 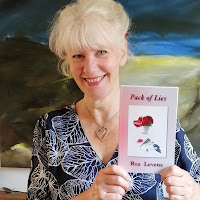 Roz Levens has always been nosey. Don't take her for a cup of coffee, because she'll be watching the people behind you, and scribbling notes like 'lampshade hat, odd knees, likes cats' onto the back of a receipt scavenged from the depths of her bag.

'Pack of Lies' is Roz's first voyage into noveldom. Previously she has been published in lots of anthologies of short stories, and she won the coveted Worcester LitFest Flash Slam Challenge of 2017 . It's the only trophy she's ever won, if you don't count shares in a youth club ten pin bowling cup back in nineteen hundred and frozen to death.

She plots while walking Reg, her border collie. Oh, the tales he could tell...

Nervously, I got into the car. This was going to be the longest trip that I had taken since lockdown began, ten weeks previously, and my heart was hammering. The old red Vauxhall groaned and rattled all the way to my destination, and I prayed to the God of Knackered Old Cars to let me get there in one piece, without breaking down or blowing up.

After just half an hour the city sign appeared. Cautiously, I joined the traffic in the right-hand filter lane and pulled into the car park, checking my phone as I put the handbrake on.

I glanced to my right, and sure enough, there he was, leaning nonchalantly against the wing of his car. Leaving two spaces between us, I re-parked.

‘Roz.’ He nodded at my car. ‘Open the back and I’ll put the boxes in for you. You don’t need to touch them. I’ve not handled the contents, you’ll be okay.’

I did as he asked, relaxing as the goods were installed. I slammed the boot firmly.

Was it a drugs deal, dear reader? A money laundering scheme? An episode of Breaking Bad? No. This was me, meeting my publisher during lockdown, collecting my newly printed copies of ‘Pack of Lies’ in Waitrose car park.

It wasn’t how I imagined this moment, when I signed my publishing contract. I’d imagined hearty handshakes, followed by a book launch party where I would be flamboyantly signing books for folk, quaffing bubbles and hugging all and sundry. What I got was social distancing and zoom.

The zoom launch is a curious beast. I shied away from using my book as a backdrop image, on the grounds that digital screens tend to give the presenter a profile like a Cyberman. I ended up with a three quid poster of the book cover, enlarged in our local printshop and instead of the stage that I had envisaged, I had my iPad, balanced on a stack of recipe books on the windowsill of my spare room office to catch the best light.

At 7:30, 36 screens lit up. I hopped from face to face, trying to chat to everyone before the launch proper started. It was only afterwards when someone sent me a screen grab that I even noticed some people.

It went well. I snapped my reading glasses in half in my pre-presentation anxiety, and had to read from a distance. I knocked the iPad over once in my exuberant delivery, and I couldn’t hear the muted screens applauding, but we had fun. And I sold some books, so that was a result.

Next time, it will be different

Graham has taken one risk too many.

Now he owes a lot of money to the wrong people, and he is running for his life.

Will the women he has duped unite to save him?

Is he even worth saving?