This Thursday is another busy day in the publishing world with lots of fantastic books being published including The Separation by today's debut spotlight guest, Dinah Jefferies. 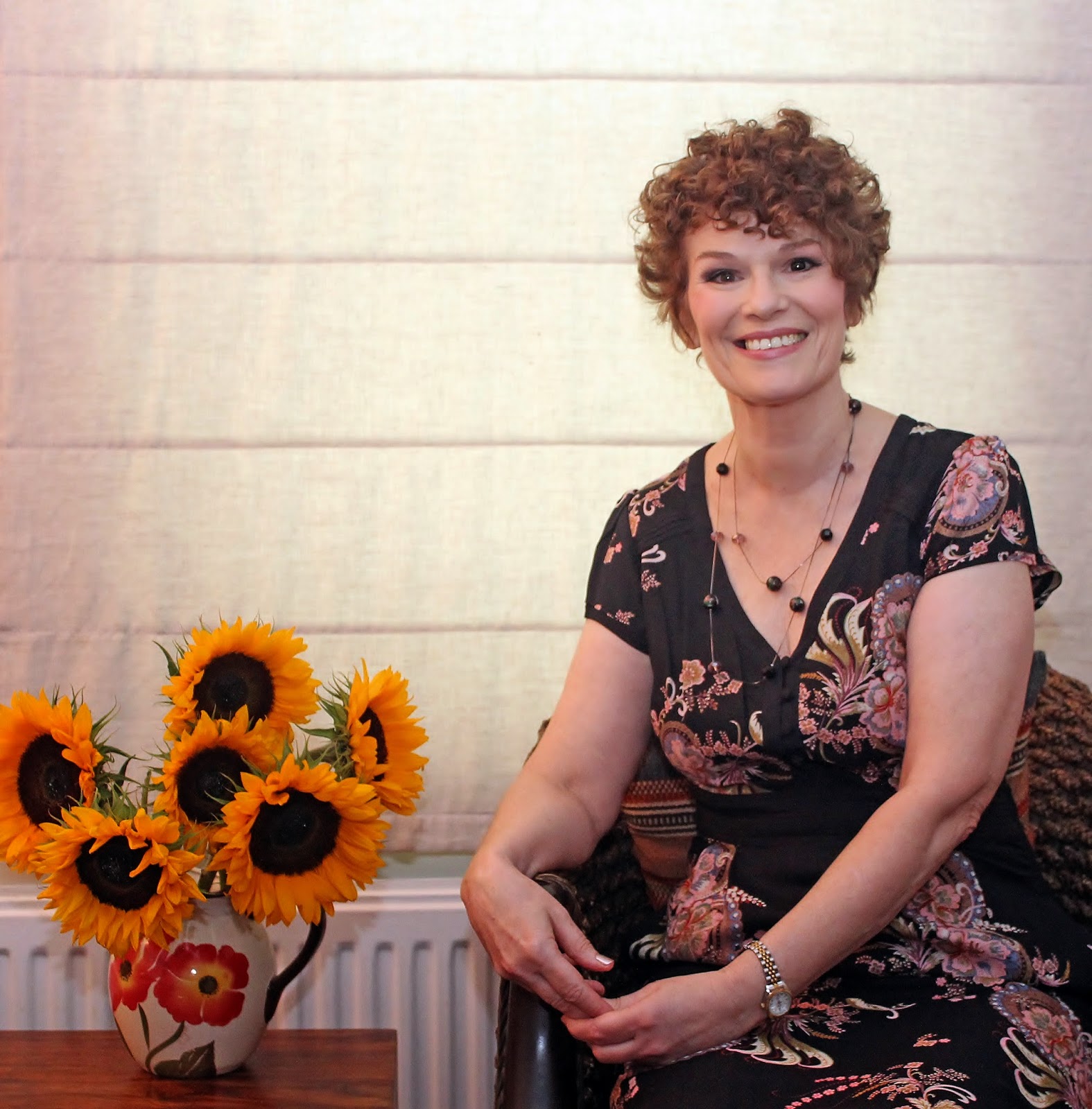 I was born in Malaya in 1948 and moved to England at the age of nine. In 1985, the sudden death of my fourteen year old son changed the course of my life, and deeply influenced my writing. I drew on that experience, and on my own childhood spent in Malaya during the 1950s to write my debut novel, The Separation. Memories of guns piled high on the hall table when the rubber planters came into town for a party, the colour and noise of Chinatown where I was taken by my Chinese amah, the houses on stilts, and the lizards that left their tails behind.

Now living in Gloucestershire with my husband and slightly overweight Norfolk terrier, I spend my days writing, with time off to make tiaras and dinosaurs with the youngest generation.

I've lived in San Gimignano in Tuscany while working as an au pair for an Italian countess, and also lived in a 'hippy' rock 'n' roll commune based in an Elizabethan manor house, but I started writing when I was living in a small 16th Century village on a mountain top in Spain. I was homesick and on a visit to England it was my mother's Malayan photograph album that stirred the memories, I started to think about the past, and that led to The Separation.

A country at war with itself,
a family divided and betrayed,
a bond that can never be broken...

Malaya, 1955. Lydia Cartwright returns from visiting a sick friend to an empty house. The servants are gone. The phone is dead. Where is her husband Alec? Her young daughters, Emma and Fleur?

Fearful and desperate, she contacts the British District Officer and learns that Alec has been posted up country. But why didn't he wait? Why did he leave no message?

Lydia's search takes her on a hazardous journey through war-torn jungle. Forced to turn to Jack Harding, a man she'd vowed to leave in her past, she sacrifices everything to be reunited with her family.

And while carrying her own secrets, Lydia will soon face a devastating betrayal which may be more than she can bear...


Can you tell us a little bit about your debut book The Separation?
The Separation is set in the 1950s in tropical Malaya during The Emergency - really a war between Chinese communists hidden in the jungles and the British Administration. It was labelled an ‘Emergency’ so that the owners of tin mines & rubber plantations could claim the insurance on their losses when the terrorists burnt down the plantations or blew up mines. In the middle of all this, one of my two main characters, Lydia, returns home to find her house empty and her daughters gone. She has no idea that they’ve been taken by their father to live in England, and acting on false information begins a hazardous search for her missing daughters. As it’s a dual narrative novel, it’s also partly set in 1950s England, where Lydia’s daughter, Emma, is struggling to cope with a threatening situation.

Where did the inspiration come to write about a mother searching for her family in 1950s Malaya?
Because I wanted to write about loss, it meant that I had no choice but to draw on the experience of losing my own son to write the story. However, I thought the one thing worse than the death of your child, must be not knowing what has happened to them. I can’t imagine how you could even live your life, how you could eat, how you could breathe. I used Malaya as the setting because I was born there and lived there during the 1950s. It was perfect because Malaya was in chaos after the Japanese occupation during WW2, and during the 1950s the newly restored communications were being destroyed on a daily basis by the Chinese ‘Terrorists’. With phone lines cut, ambushes, fires and regular shootings it would be very hard to trace missing persons.

Can you tell us a bit about the two main characters?
Lydia is a talented, warm woman who adores her children, but trapped in a difficult marriage she wants more from life. The situation for women in the 50s was so different from now, and few colonial wives had jobs; unfortunately her longing for more gets her in to trouble. Emma, her daughter, is outspoken, clever and daring, but her father has no idea how to cope with her and, in fact, the way he behaves is pretty appalling.

Have you any exciting plans for publication day?
Well, it will be right in the middle of a book tour, so I expect I’ll be rushing round trying to control my very curly hair – something I have in common with Emma - working out what to pack, and what to wear at different events! Having said that, cake might make an appearance.

Are you going to treat yourself to something nice for publishing your first novel?
As the book is already published in four other countries I have to admit to already having had a few treats, mainly in the form of one or two nice things to wear.

Are you currently working on a new book?
My second book The Tea Planter’s Wife is already written, and will be published by Penguin and internationally in 2015.

It’s set in 1925 Ceylon. With the scent of cinnamon and jasmine filling the air, Gwendolyn Hooper steps off the boat from England. A fresh- faced bride of nineteen, she has come to join her new husband and embark on a new life. But when she gives birth to her first child, she is faced with a choice no mother should have to make.

Last year I went to Sri Lanka and stayed on a wonderful tea plantation. That helped so much with the detail. And this year I went to Vietnam on a research trip for the third book. So as you see, all three books are set in South East Asia or the Far East.

Did you always know that you wanted to be a writer?
Not at all. I’ve done many different things in my life: been an au pair in Italy, lived with a rock band, worked as an artist, but never expected to be publishing books in my sixties. I feel very fortunate.

Are you a plot planner or a start writing and see where it takes you writer?
I’m actually a bit of both. I will have decided on the setting and the time period during my research period. At that stage I’m finding out all I can and hoping an idea will come. Once I have an idea for the story and I have my main characters, I work on premise of the novel and decide what the themes are.

I work out how I think the novel might end, and some of the things that will happen on the way. The rest I simply cannot plan. My brain goes flat if I try, so instead I start writing, and in the act of writing the ideas start to flow. As they flow I add to or alter my plan. So it’s plan write, then write plan, and so on.

What does a typical writing day look like for you?
After breakfast I go straight to the computer for about five hours or so with a very quick break for lunch. When I stop, I walk the dog or I nip down to my daughter’s house to see her and her children. After that you’ll often find me scribbling notes in one of my dozens of note pads, sometimes when I’m supposedly relaxing or asleep. I completely live in a book until the first draft is finished.

If you could go on a writing retreat anywhere in the world, where would you choose?
Oh goodness. That’s hard. Part of me wants to say a wonderful exotic island off the coast of Malaysia, just like the ones we holidayed on when I was a child. But actually I think Norway would be fabulous. I went there on a book tour and loved it. The air is so fresh and it’s such a beautiful place, I’m sure I’d feel invigorated - maybe a log cabin with a roaring fire, and a view over snow capped mountains and frozen lakes. Perfect to get you thinking about the Far East! I’d like to be alone with some soothing classical music, but wait, I would need my husband there too. I really hate cooking and he is so good at it. And then there’s the dog… Perhaps a retreat wouldn’t be the thing for me after all.
Posted by Sharon at 06:45