Earlier this year I had the pleasure of chatting to Amanda James about two of her books that had just been published, and today I'm delighted to welcome her back to talk about her third book of the year... busy lady... Cross Stitch, sequel to A Stitch in Time, which has just been published as an eBook.

It should be the happiest day of her life. Despite past heartache, Sarah Yates is finally marrying her true love, John Needler.

But Sarah and John can’t pretend they’re an ordinary couple. They’re time travellers and where time travel is involved, nothing runs smoothly. One minute Sarah is saying her vows and the next she is hurtled back in time to a country that is on the cusp of war, and into the company of the bad-tempered Veronica Ratchet.

Newly-wedded bliss is certainly not on the cards for Sarah as events see her travelling from the British punk era to 1950’s America. And even when she returns home she can’t escape Veronica.

But when the past and the present collide, that’s when the real problems start …

Thanks for inviting me back to your blog, Sharon!

Can you give us a hint as to what we can expect in Cross Stitch?
Sarah plans to marry her true love, John, but will she live happily ever after? A stitch in time may save nine, but a cross stitch spells disaster ...

Did you know when you were writing A Stitch in Time that you wanted the story to continue?
I hadn’t planned on writing another but Sarah kept whispering in my ear towards the end so I left it open.

Is this the end for Sarah and John or are they likely to crop up again in the future?
When I was writing Cross Stitch I decided that it would be the end. The same thing happened towards the final few chapters however. So ... Sarah and John might pop up in the future and there might also be others ready to take over the time travelling baton too.

Are you currently working on a new book?
I have just finished a mystery/suspense called Summer in Tintagel. I also have a few more ideas rumbling around in my head.

What does a typical writing day look like for you? Do you set yourself a daily writing target?
No, I don’t have a typical day at all. I don’t always write every day, but I do tend to jot ideas down. When I am writing I might do eight hour days.

Do you plot your novels or just see where they take you?
I have a title – can’t write without one, then I just put a number of my main bullet points under it. This is my very rough plan for the novel and as I come to each bullet point I cross it off and carry on with the rest. I have a rough idea for the beginning, middle and end, but overall I just see where it takes me.

What is the best advice you have ever received about writing?
Never give up.

If you could write in another style of genre, what would it be and why?
I like playing with words and so wouldn’t mind a bash at literary fiction. I think it would be hard to sustain, so therefore it would be a challenge.

When you’ve finished writing a book, do you treat yourself to a reward?
I normally like to get out and in the fresh air. When I finished my last one I went to Tintagel with my husband and we had a drink in an quaint old pub.

If you could write collobratively with anyone else, who would it be and why?
Dean Koontz, because he is one of my all time favourite writers who inspired me to have a bash at writing. He is a lovely man who wrote two personal letters to me once. This man has sold over 450 million books and to take the time to personally answer a fan’s letter is awe inspiring to me.

Where would you perfect writing retreat be?
In a beach house overlooking an ocean, preferably the Atlantic or Pacific.

Do you read much yourself? If so, what types of books do you like to read?
I read in bed most nights. I have an eclectic taste, but mostly I like mystery suspense. 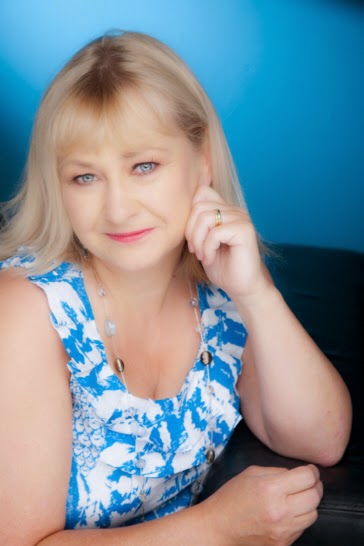 Amanda James was born in Sheffield and now lives in Cornwall with her husband and two cats. In her spare time, she enjoys gardening, singing and spending lots of time with her grandson. She also admits to spending far too much time chatting on Twitter and Facebook! Amanda recently left her teaching role (teaching history to sixth form pupils) to follow her ambition to live her life doing what she most enjoys—writing.

Amanda is a published author of short stories and her first novel with Choc Lit, A Stitch in Time was chosen as a Top Pick in RT Book Reviews magazine in the US in July 2013 and won a 2013 Reviewers’ Choice Award from Single Titles.