One of the reasons for setting up the Salisbury Literary Festival was in order to celebrate its rich and varied literary heritage. Each year, the festival includes a Salisbury Greats strand, where we look in detail at the work of some of these authors, and the 2019 festival is no exception.

Over the centuries Salisbury and the surrounding area has provided both a setting for a number of wonderful novels, and also a home to many great writers themselves. Most recently, the playwright Barney Norris, who grew up in Salisbury, published his debut novel, Five Rivers Met On A Wooded Plain. At the heart of his book is the place he describes as ‘this quiet city, where the spire soars into the blue, where rivers and stories weave into one another, where lives intertwine.’

But Barney Norris is by no means the first writer to write about Salisbury. Norris attended Bishop Wordsworth’s School, which from 1945 to 1961 was famously graced with the presence of William Golding – one of the rare handful of novelists to have won both the Booker Prize and the Nobel Prize for Literature. It was while Golding was a teacher at the school that he wrote his most famous book, Lord of the Flies. However much his observations of pupil behaviour fed into that novel, the setting of Bishop Wordsworth’s certainly influenced his 1964 novel, The Spire. As well as working in such close proximity to the cathedral, Golding’s time at Bishop Wordsworth’s coincided with the rebuilding of the top of the spire between 1945 and 1951 – an echo of his own novel about the building of the medieval cathedral.

While William Golding never specifically names either Salisbury Cathedral or Salisbury as the city in The Spire, other writers have gone one further and renamed Salisbury for their literary endeavours. In Thomas Hardy’s Wessex, Salisbury became Melchester for novels such as Jude the Obscure and Tess of the D’Urbervilles: the former drew on the experiences of Hardy’s sisters, who attended the College of Sarum St Michaels (now the site of the Salisbury Museum); the latter ends in dramatic fashion at Stonehenge. In Susan Howatch’s work, Salisbury is the inspiration for Starbridge, and a series of six novels she wrote in late 1980s and early 1990s.

For Anthony Trollope, Salisbury is reimagined as Barchester. It was while staying in Salisbury that Trollope had the inspiration for The Warden, the first book in the Barchester Novels – the specific spot where he had the idea was on Harnham Old Bridge one mid-summer evening. Then there is Kingsbridge in Ken Follett’s The Pillars of the Earth and World Without End: Follett’s Wiltshire setting is fictional, though his Kingsbridge Cathedral at the heart of it clearly draws on Salisbury.

Indeed, Salisbury Cathedral continues to provide many writers with the perfect backdrop to their stories; Cornelia Funke used the Cathedral and the legend of William Longespee for her children’s book Ghost Knight; the cathedral has also featured both in the first novel (Glass) by Alex Christofi and the last book (Almost Heaven) by Leslie Thomas, who lived in the Close for many years.

Other writers have taken different parts of Salisbury for their settings. Edward Rutherford’s Sarum offers readers a remarkable historical sweep of the city from prehistory to the present day. In The Life and Adventures of Martin Chuzzlewit, Charles Dickens paints a vibrant picture of Salisbury Market that market-goers of today would recognise. Dickens is one of a number of writers to have used Salisbury hostelries for locations. A Salisbury literary pub crawl would take in the White Hart (Martin Chuzzlewit), The Red Lion (Thomas Hardy’s The Hand of Ethelberta) the Cathedral Hotel (the Minster Hotel in Dorothy L Sayer’s Whose Body?) and the Boston Tea Party (where Samuel Pepys stayed in the 1660s, when it was the George Inn.) 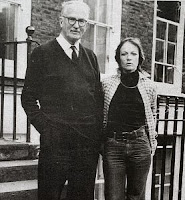 This year, the Salisbury Greats strand includes a literary walk around the Cathedral Close as well as events regarding the work of two classic writers. Michael Gilbert was one of the most influential crime writers of the twentieth century. His writing career began when he was a teacher at the Cathedral School, and his debut novel, At Close Quarters, is set in a Salisbury-like Cathedral Close. Coming to speak about her father’s work is Harriet Gilbert, who in the family literary tradition is the presenter of Radio 4’s A Good Read and BBC World Service’s World Book Club.

Edith Olivier was a remarkable woman in many respects. Born locally in Wilton in 1872, she was awarded the MBE for setting up the Women’s Land Army in Wiltshire during the First World War and became the first female councillor and mayor of Wilton in the 1930s. But she was also an acclaimed writer in her own right, and part of an artistic social set that included Cecil Beaton, Edith Sitwell and a young Rex Whistler. Talking about her life at the festival is biographer Anna Thomasson, author of the critically-acclaimed A Curious Friendship, about the relationship between Olivier and Rex Whistler.

Closing the festival on the Sunday evening is an event in aid of Salisbury Foodbank, featuring readings from the leading lights of the city’s current literary scene. Who knows – maybe there will be some names here who will be included in the Salisbury Greats series in the future?


All book titles in bold are Amazon Affiliate links which will earn me a few pence if anyone clicks through and makes a purchase - any money earned will go towards buying books or gifts for giveaways.
Posted by Sharon at 06:00