Today I have a bonus Q&A today with Richard Roper ahead of his appearance at Salisbury Literary Festival this weekend. 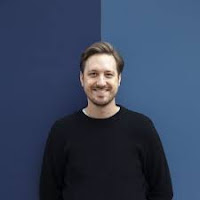 Can you tell us a bit about yourself and your writing journey?
Absolutely. Something to Live For is technically my debut but I wrote a couple of books before this which didn’t make it. I had decided that my third attempt was probably going to be my last, so thankfully it was the one that made came off! I was lucky enough to get a brilliant agent – Laura Williams at Greene & Heaton – and within a week of the book going out on submission I was in the mad position of having a UK and US book deal, with some European ones on the way. It made all the rejection and early morning starts worthwhile!

I'm looking forward to your panel at this year's Salisbury Literary Festival, how did you feel to be invited to be part of the festival? And what are you most looking forward to about your event?
Thank you! I’m really looking forward to it, and I’m really flattered to have been asked. I’ve done a few festivals in the last month or so and it’s just the nicest thing to be given the opportunity to talk about your book, hear from other authors, and get to meet lots of lovely readers.

If  you had to give an elevator pitch for Something to Live For, what would it be?
A darkly comic, ultimately uplifting tale of a man who is faced with a dilemma: to carry on living a lie, or risk losing everything to have another shot at living life to the full.

Sometimes you have to risk everything to find your something...

All Andrew wants is to be normal. He has the perfect wife and 2.4 children waiting at home for him after a long day. At least, that's what he's told people.

The truth is, his life isn't exactly as people think and his little white lie is about to catch up with him.

Because in all Andrew's efforts to fit in, he's forgotten one important thing: how to really live. And maybe, it's about time for him to start.

Loneliness and living  alone is at the heart of Something to Live For, both for Andrew with his fictional family and the people who have died with no next of kin, where did the inspiration come from for these storylines?
What sparked the story was an article I read about the council workers who have to deal with the situation when someone dies alone. I knew I wanted to follow a character who did that job. And then I started to think about periods of loneliness I had been through myself, which had led to experiences both comic and sad, and decided to explore that further with my protagonist, Andrew.

How much research did you need to do about how councils deal with arranging funerals for those who have no family?
I read enough to make sure I gave a believable account of the job Andrew does. But while the job does play a big part in the story, I was keen that at the forefront was the story of a man overcoming his own issues and learning to get out of his comfort zone, so in the end I cut quite a lot of the job stuff, as interesting as it was to find out about!

Which came first for you  – characters or plot?
Plot just about shades it. This was the first book I really planned before I started writing, so I thought a lot about where I wanted the story to go. Andrew’s quirks and idiosyncrasies came together during the writing. The same for Peggy, the person who arrives to change Andrew’s life.

Do you think your experience as an editor helped you during the writing/editing process?
It certainly helped from the standpoint of being around so many talented fiction editors, listening to them pitching their books and talking about how why they had decided to commission or turn down a book. I work on the non-fiction side, and it’s all very different there compared to how novels are taken on!

When you're not in the midst of writing/editing, what type of books do you like to read for pleasure?
I read more fiction than non-fiction. I’m a real ‘word-of-mouth’ reader – if I see people on twitter raving about a book that’s what I tend to go for. The novels I enjoy the most broadly fit in to the reading group/contemporary fiction bracket, but I’ll give anything a go if it has a compelling story and interesting characters.

And finally what can we expect from you next?
I’m on to book two now, which should be out in 2021 (if I pull my finger out and get it written in time…).

If you're local or can travel to Salisbury this weekend, then there's still time to enter the giveaway currently running to win a pair of tickets to Richard's event with Keith Stuart although you'll have to be quick as entries close at midnight tonight. Enter here.